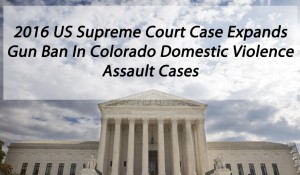 2016 US Supreme Court Case Expands Gun Ban In Colorado Domestic Violence Assault Cases – The loss of a person’s second amendment right to bear arms is critically important to many many people in our country. The United States Supreme Court, in a case called Voisine v. United States, decided on June 27, 2016, dealt another blow to that right in the context of misdemeanor domestic violence convictions.

In this case, the High Court closed a “loophole” in the already restrictive domestic violence based gun control laws by extending the federal prohibition on firearms possession by convicted felons to persons convicted of a lower form of misdemeanor crimes of domestic violence.

The new decision stands for the proposition that, after this case, all that is required to lose the right to bear arms after a misdemeanor domestic violence assault conviction is the “use of physical force” – there is no requirement that the use of violence include an “intentional” act.

After this case, the required element of the “use of force“ only requires some “volitional action.”

The Mental State Or Mens Rea Requirement To Commit A Crime

Crimes require at least two elements – a mental state (the mens rea) and a volitional act ( the actus reus). A fundamental principle of Criminal Law is that a crime must consists of both a mental and a physical element.

The mens rea of a crime reflects a person’s awareness of the fact that his or her conduct is criminal, it  is the mental element. The actus reus, the act itself, is the physical element.

Here is a list in the order of the most aware to the least aware mental states:

Strict Liability (no mental state is necessary in this rare exception to the rule.)

The importance of Voisine is that now a Colorado misdemeanor assault conviction with a mens rea of recklessness will qualify as a misdemeanor crime of violence under § 922(g)(9).

The Lautenberg Amendment is a federal law which prohibits a person who has been convicted of a domestic violence crime from owning a firearm.

USC §922(g)(9) provides (which law prohibits the ownership of guns in relevant part) as follows:

(g) It shall be unlawful for any person—

(1) who has been convicted in any court of, a crime punishable by imprisonment for a term exceeding one year;

(2) who is a fugitive from justice;

(3) who is an unlawful user of or addicted to any controlled substance (as defined in section 102 of the Controlled Substances Act (21 U.S.C. 802));

(A) is illegally or unlawfully in the United States; or

(6) who has been discharged from the Armed Forces under dishonorable conditions;

(7) who, having been a citizen of the United States, has renounced his citizenship;

(8) who is subject to a court order that—

A conviction qualifying under this law mandates a federal lifetime ban on gun ownership.

Colorado, as is the case in most states – defines misdemeanor assaults based on the model penal code which includes reckless conduct which results in physical violence. Now reckless assaults has been swept into Section 922 (g)(9).

What follows are the two most common forms of misdemeanor assault type charges in Colorado Domestic Violence cases:

(1) A person commits harassment if, with intent to harass, annoy, or alarm another person, he or she:

(a) Strikes, shoves, kicks, or otherwise touches a person or subjects him to physical contact; or

(1) A person commits the crime of assault in the third degree if:

(b) The person, with intent to harass, annoy, threaten, or alarm another person whom the actor knows or reasonably should know to be a peace officer, a firefighter, an emergency medical care provider, or an emergency medical service provider, causes the other person to come into contact with blood, seminal fluid, urine, feces, saliva, mucus, vomit, or toxic, caustic, or hazardous material by any means, including throwing, tossing, or expelling the fluid or material.

(3) Assault in the third degree is a class 1 misdemeanor and is an extraordinary risk crime that is subject to the modified sentencing range specified in section 18-1.3-501(3).

The Supreme Court’s Reasoning In Voisine

Voisine stands for the proposition that, unlike accidental conduct, reckless conduct is not an accident and involves a deliberate decision.

“To commit an assault recklessly is to take that action with a certain state of mind (or mens rea) – in the dominant formulation, to ‘consciously disregard’ a substantial risk that the conduct will cause harm to another.”

The word “use,” in the phrase “use of force” means merely a volitional act whether that act is performed intentional, knowing, or reckless.

Therefore a “person [who] throws a plate in anger against the wall near where his wife is standing,” which can be “reckless” if he “recognized a substantial risk that a shard from the plate would [or more properly, could] ricochet and injure his wife.”

Still Does NOT Reach Or Include Accidental Conduct

Most of the Colorado convictions for domestic-violence offenders are by plea bargain and involve misdemeanors, not felonies. Importantly, when people engage in conduct that could be perceived as violent but the acts of those people in injuring one another are accidental this is NOT the kind of crime that falls within the Voisine decision.

This bears repeating, this new case extends the ban on the possessing weapons to domestic-violence assault misdemeanors ONLY if their acts “intentionally, knowingly, or recklessly” cause offensive physical contact.

Accidents including what the Model Penal Code might term “negligence” are not encompassed, but a “reckless” use of force – that is, a forceful act “undertaken with awareness of their substantial risk of causing injury” – is criminally condemned precisely because it is “the result of a deliberate decision to endanger others.”

If you found any of the information I have provided on this web page article helpful please click my Plus+1 or the Share buttons for Twitter and Facebook below so that others may also find it.

If, after reading this article, you have questions about your case and would like to consider retaining our law firm, we invite you to contact us at the Steinberg Colorado Criminal Defense Law Firm – 303-627-7777.

Never stop fighting – never stop believing in yourself and your right to due process of law. You will not be alone in court, H. Michael at your side every step of the way – advocating for justice and the best possible result in your case.

“A good criminal defense lawyer is someone who devotes themselves to their client’s case from beginning to end, always realizing that this case is the most important thing in that client’s life.”

You should be careful to make a responsible choice in selecting a Colorado Criminal Defense Lawyer – and we encourage you to “vet” our firm. Over the last 30 plus years – by focusing ONLY on Colorado criminal law – H. Michael has had the necessary time to commit to the task of constantly updating himself on nearly every area of criminal law, to include Colorado criminal law and procedure and trial and courtroom practice. H. Michael works hard to get his clients the best possible results in and out of the courtroom. He has written, and continues to write, extensively on Colorado criminal law and he hopes this article helps you in some small way – 2016 US Supreme Court Case Expands Gun Ban In Colorado Domestic Violence Assault Cases.

Summary
Article Name
2016 US Supreme Court Case Expands Gun Ban In Colorado Domestic Violence Assault Cases.
Description
The loss of a person’s second amendment right to bear arms is critically important to many many people in our country. The United States Supreme Court, in a case called Voisine v. United States, decided on June 27, 2016, dealt another blow to that right in the context of misdemeanor domestic violence convictions.
Author
H. Michael Steinberg