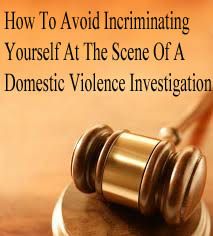 Colorado Domestic Violence Lawyer – How To Avoid Incriminating Yourself At The Scene Of A Domestic Violence Investigation – The most defensible kind of case in any Colorado criminal courtroom  is the classic “he said – she said” absence of forensic evidence domestic violence case.

The problem is that the police are clever in the way they trick suspects of acts of domestic violence into making incriminating statements at the scene of a Colorado domestic violence investigation (when the suspect is not yet under arrest and subject to mandated Miranda warnings). The suspect’s natural defense mechanisms do not seem to “kick in” until the cuffs are placed on their hands – it is at that time that they first realize what they may have unwittingly done.

When Statements Are Held As Involuntary Confessions

All statements admitted against a defendant in the trial of Colorado domestic violence cases must be knowingly and voluntarily made. Challenges to the “means” used to elicit any statement from a suspect (that could later be admitted as a confession) are evaluated under what is known as a “ totality of the circumstances” standard.

An “involuntary confession” is one that has been coerced in some way by official government pressure. If the statement is was “involuntary” and violative of the Due Process Clause of the Fourteenth Amendment, it cannot be admitted as evidence at trial against the defendant.

The Miranda decision was intended to be a protective measure against police pressure tactics. If the Miranda rights are given and then waived – most confessions are seldom found to be involuntary. But what about cases where Miranda does not apply – that is where the suspect has not been arrested or placed into custody?

When suspects are interrogated BEFORE Miranda warnings apply – ANY and ALL statements must be found to have been voluntarily given under the “totality of the circumstances” test.

What Does The Totality of the Circumstances Test Mean?

Obvious forms of police coercion such as pain and torture are the easy case for involuntary convictions. It is the more subtle psychological devices used by the police to elicit a confession against the accused’s will that are the subject of this article.

“[W]hether the behavior of the State’s law enforcement officials was such as to overbear [the defendant’s] … will to resist and bring about confessions not freely self-determined.”

To determine whether a confession is voluntary, the court must assess “the totality of all the surrounding circumstances-both the characteristics of the accused and the details of the interrogation.”

The key factors used to determine the totality of the circumstances test include the suspect’s:

Using the totality of circumstances test, courts also consider such external factors as:

[C]ourts must also consider such factors as the defendant’s mental health, mental deficiency, emotional instability, education, age, and familiarity with the judicial system”.

The Totality Of Circumstances Test & Threats or Appeals to Friendship

What is unlawful are specific or even general threats to the suspect, and /or his or her family. In addition, when an officer appeals to a special friendship between the interrogating officer and the arrestee – this may also cross the line as violative of basic fairness pursuant under the constitutional right to due process.

Threats to one’s children such as they will be “taken away” from a parent or the parent would lose government benefits for them if they did not “cooperate” have been found to violate basic fairness.

At times a defendant may be in a weakened condition as a result of lack of sleep while in custody or as a result of mental illness. The United States Supreme Court held in Colorado v. Connelly, that there must be some action by state officials that is causally related to the confession.

In Connelly the Court held that the a defendant’s unsolicited confession to a police officer was NOT involuntary because his mental illness drove him to confess.

On the other hand any analysis of involuntariness will focus on the effect of the specific interrogation techniques as that technique is applied to the unique characteristics of a particular suspect.

Courts must determine whether the police tactics at issue were coercive before examining whether defendant’s will was overborne. The Connelly case “stands for the limited proposition that a defendant’s mental condition is not in itself sufficient to make a confession involuntary”

An example of an improper technique would be defendant subjecting a suspect to a 4-hour interrogation while incapacitated and sedated in intensive-care unit. A suspect that suffers from some mental incapacity, such as intoxication or retardation – which incapacity is known to interrogating officers – may be sufficient to support a lesser quantum of coercion and call into question the validity of a confession.

If interrogating officers “reasonably should have known that a suspect is under the influence of drugs or alcohol” then a “lesser quantum of coercion” may be sufficient to call into question the voluntariness of the confession.

It has long been held that some threats – such as threats to inform the prosecution and courts of a suspect’s refusal to cooperate, or promises to inform them of cooperation, or exaggerations and even outright lies about the evidence against the defendant do NOT necessarily render a confession involuntary.

What Is The Procedure for Challenging A Confession Or Incriminating Statement?

A trial judge is given the responsibility – if challenged by the defense – of deciding the issue of a confession’s voluntariness before a jury is allowed to hear it.

The motion to suppress (the confession) is followed by a hearing on the motion. The defense lawyer alleges in the motion facts which, if true, would render the statements involuntary. If the defense establishes that a confession is involuntary – unlike a Miranda violation – a coerced confession cannot be used for any purpose, including cross-examination of the defendant at trial.

In any case where there is a confession or incriminating statements – the analysis that should precede the filing of a motion to suppress the damaging evidence. The analysis should answer at least some of these important factors:

The Use Of Expert Testimony In Involuntary Confession Cases

An expert, if allowed to testify by the court – CAN testify to the mental capacity of a defendant but cannot give and opinion on whether a defendant was telling the truth in the police interview.

The police reports are often filled with inaccuracies, contradictions and unjustified conclusions. Word choices in the report are most often paraphrases – the officer’s – not the defendants.

The officer’s handwritten notes need to be studied for inclusions and omissions. Final written reports often do not properly reflect what was said and the notes likewise.  Reporting officers often do not get the story statements right in light of the lapse between the time of the note-taking and the time of his report-writing.

A Few Ideas For Attacking The Alleged Confession

Your approach must be that the investigating officer’s errors are one of two things – mistaken or lying.

Police testimony is often weeks, months or even years after the investigation and therefore suspect.

Dozens of other investigations – scores of arrests – (many of them precisely like the one at trial) have occurred in the interval period and the facts of these other cases are easily confused with the present case.

Police investigate and interview hundreds of arrestees, suspects and witnesses in the intervening period – it is simply not possible to recall the details of this case independent of those other investigations.

Police reports, such as they are, are intended to be the single most important method of preserving the evidence important to a case. Officers must rely on those reports to recall what happened in an investigation and – if properly cross examined – police can be forced to admit they have little or no independent memory of what occurred so long ago and that their reports are flawed.

The Fifth Amendment gives you the right to never be a witness against yourself.

You should never talk to the police because:

“One of the Fifth Amendment’s basic functions is to protect the innocent who otherwise might be ensnared by ambiguous circumstances. Truthful responses of an innocent witness as well as those of a wrongdoer may provide the government with incriminating evidence from the speaker’s own mouth.”

ABOUT THE AUTHOR: H. Michael Steinberg – Email The Author – A Denver Colorado Domestic Violence Criminal Defense Lawyer – or call his office at 303-627-7777 during business hours – or call his cell if you cannot wait and need his immediate assistance – 720-220-2277.

If you are charged with A Colorado crime or you have questions about How To Avoid Incriminating Yourself At The Scene Of A Domestic Violence Investigation, please call our office. The Law Offices of H. Michael Steinberg, in Denver, Colorado, provide criminal defense clients with effective, efficient, intelligent and strong legal advocacy. We can educate you and help you navigate the stressful and complex legal process related to your criminal defense issue.

H. Michael Steinberg, is a Denver, Colorado criminal defense lawyer with over 30 years of day to day courtroom experience – specializing in Colorado Criminal Law along the Front Range. He will provide you with a free initial case consultation to evaluate your legal issues and to answer your questions with an honest assessment of your options. Remember, it costs NOTHING to discuss your case. Call now for an immediate free phone consultation.

Helping Clients To Make Informed Decisions In the Defense of Colorado Criminal Cases.

Contact A Lawyer with Three Decades of Experience as a Denver Criminal Attorney at The Steinberg Colorado Criminal Defense Law Firm Today.

Important: This article is for informational purposes only and not intended to provide legal advice to any individual or group. Individuals and groups should obtain competent legal counsel from lawyers admitted to practice in the jurisdictions where they are subject to legal process.